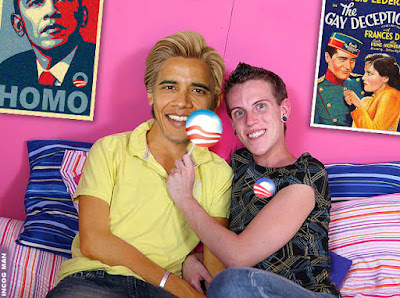 Before an audience of hypnotized zombies, Obama explained how a graveyard had reminded how of a Klan meeting, and then unveiled his plans to add "all the colors of the rainbow" to graveyards everywhere.

"Furthermore, if a gravestone bears a name that is too white, it will be Africanized or faggotized as deemed necessary by my new Tolerance Czar, Bruce Jenner," said Obama.

Bruce Jenner, who is now dating a man known only as "The Confederate Fag", said he will be hiring activists from Black Lives Matter to undertake the painting of the shockingly white gravestones, and new graduates from Ebonics U to change the names.

Obama said it would bring thousands of jobs into the economy, and possibly avert the collapse of the dollar.

The dollar has been collapsing rapidly since George Washington was replaced with Richard Simmons, and "In God We Trust" was replaced with "Sweat and Shout", among other fabulous alterations.
Posted by Unknown at 9:04 PM