Confederate Flag Down, Cuban and Gay Flags Up 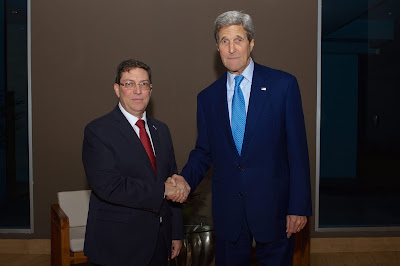 Now that the "racist" Confederate flag is down, and gayness and other perversions are set to be forced upon all age groups, the Cuban flag is flying high again over the new embassy in Washington D.C.

John Kerry, a veteran who decried the Vietnam War, a war against communism, helped "normalize" relations with the country that John F. Kennedy sought to win from communism.

We also have a statue made in communist China of communist MLK in Washington D.C., and talk of taking down all the "racist" monuments to the Founding Fathers, civil war heroes, and any white people who helped create this country that the communists are destroying.