Race-Mixing is the Crime of the Millennium 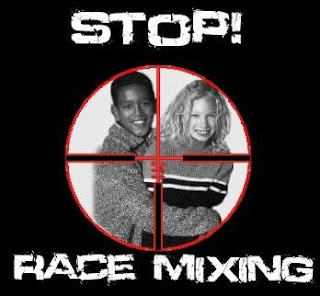 The United States today is ruled by an elite that has seized control of the media, Hollywood, publishing, politicians, and the educational institutions and is pushing an agenda of race-mixing, immigration, and political correctness with the clear aim of turning all white countries into countries of mongrels with no sense of racial identity.

The public was warned of this heinous crime many times, but the perpetrators of the crime had such a well-thought out plan, and such immense financial resources, that they were able to paint those who tried to warn the public as "haters" while also setting them up legally, cutting them off financially, and infiltrating their organizations when they arose.

Unfortunately, much of the public mind has been subdued by the filthy tide of propaganda spewing from TV's, movie screens, newspapers, and the internet, and are unable to even consider the possibility that those who promote the white race even have a point, never mind that they have valiantly fought against the alien invaders who have taken over all the white nations of the world, including Canada and Australian, with the possible exception of Iceland.