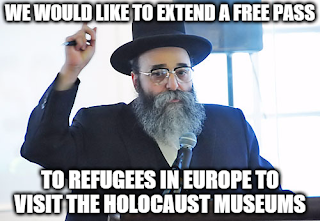 What luck! Just months before a flood of potentially anti-semitic Syrian refugees began arriving in Italy, Holocaust denial was criminalized.

And, quite coincidentally, this issue was raised in the Times of Israel.

A similar situation exists in Germany which is set to receive millions of refugees in the near future.

This brought to mind Stephen Steinlight's worries about immigration as covered by William Pierce in which he noted that immigrants would not be indoctrinated by the Holohoax and therefore potentially less susceptible to Jewish control. Steinlight was also concerned about Muslims, whom he described as having Jewish ethnocentric qualities.