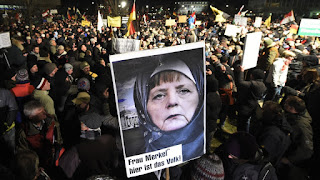 The NY Times reports that "democratic" Germany has no right to protest the injection of immigrants into Germany who will be "distributed around Europe".

The excuses given are that the protestors are "far right", that Germany is being charitable (to non-Germans), and violence must be prevented by the use of police force.

Clearly, the destiny of Germans, and White people everywhere, has been wrested from their hands.


BERLIN — German authorities braced for possible far-right violence in the eastern state of Saxony at the weekend, with Chancellor Angela Merkel on Friday promising federal support for local police seeking to prevent anti-refugee riots of the kind seen in the town of Heidenau last week.
Local authorities had imposed a blanket ban on public assemblies to prevent a repeat of the violence that occurred outside a refugee shelter last weekend, in which dozens of police officers were injured. The ban was partially lifted by a court to allow a welcome party for refugees to take place.
Johannes Dimroth, a spokesman for Germany's Interior Ministry, said federal police would be sent to Heidenau to support local forces. He was unable immediately to say how many officers would be deployed.
"We've already made one step in the right direction," with the decision to provide help, Merkel said, adding that federal authorities would "do everything within their power in order to support the Saxony police."
More generally, Merkel said European Union Interior Ministers meeting this weekend would be looking into "rapid changes to the asylum system."
She said Greece and Italy needed to be supported with common registration centers equipped with "European-wide personnel," but also with the assurance that the migrants coming in would then be distributed around Europe.


Germany, which expects some 800,000 migrants this year, has complained many others in Europe aren't pulling their weight in dealing with the influx.
"There has to be a fair distribution of refugees and asylum seekers who are deemed eligible," she said, speaking at a press conference with Denmark's Prime Minister Lars Loekke Rasmussen.
Germany in the first half of the year has seen more than 40 percent of all asylum applications, which Loekke Rasmussen said could not be allowed to continue.
He said Europe needed to reduce the number of economic refugees, partially by working with the countries they come from to create economic growth and political stability, so those fleeing wars and other violence could be offered refuge faster.
"It is not fair that Germany and a handful of other member states receive the vast majority while others receive none, but a fair burden sharing is not a solution in itself," he told reporters. "We also need to reduce the numbers of migrants that arrive in Europe to be able to welcome those refugees who have a real need for protection."
Most Germans have been welcoming to refugees, but attacks on migrants and refugee shelters have increased significantly over the past year.
On Friday, police said a petrol bomb was thrown through a window at an asylum-seekers' home in a town in northwestern Germany, starting a small fire but injuring none of the residents.
The dpa news agency quoted police spokesman Jens Petersen as saying that a mattress and a rug caught fire in the attack overnight on the school building in Salzhemmendorf that had been converted to house some 30 asylum seekers. The blaze was quickly extinguished and no one was injured.